Inkscape to the rescue!

You know what, after starting to write a simple editor to be used before the proper animation editor gets finished (not anytime soon..), I started to think – what am I doing? Why to make a crappy editor, while I could use something else to do the job, and way better (yet I hope and believe that the custom made editor will be the most comfortable way of creating the animations).

Once again, Inkscape proved its worth. SVG was relatively easy to parse (except the damn transformation matrix – I wasted hours searching for clues how to decompose the original scaling and rotation from the matrix, finally got it working though..), and the Inkscape layers turned nicely into animation key frames. It requires quite a lot of patience, and my conversion tool is dodgy to say the least, but it will enable the creation of animations for PolyAnim!

So I wasted more hours, and created the very first proper PolyAnim animation, in Inkscape. After seeing the animated dude moving on the screen, I felt very pleased about how it all turned out.

Rare moments, those. Hell, I even made a video to celebrate the event!

In case anyone would want to try the Inkscape route, I also wrote a tutorial about it.

Check out this screen shot from the demo, and compare it to the earlier shot a post or two back.. The biggest dude is the original, the others are rendered using the various render modifiers. 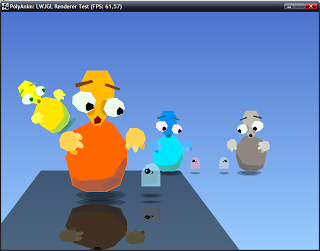