This post is about movies. In the recent years I've been getting back into my movie collecting (as physical media, that is) hobby and started watching movies a lot more once again. Fun times. But it quickly started to annoy me that I had no up-to-date list of my movies; while I did have a software for this exact purpose, I had been neglecting updating the collection and stopped altogether around 05/2010 (hmm... surely this isn't related to our first child being born...!? 🤔😅). While the software was alright, the workflow was too cumbersome: edit the collection on my home PC, export a CSV-file, upload it to a web server. Annoying. Especially with an increasing backlog of additions. All this meant that effectively the collection was about 12 years out of date. Not good!

I started thinking: wouldn't it be convenient to have a web app for managing the movie collection? That way I'd always have up-to-date list in my pocket, and when buying new discs I could easily check if I already had the movie (or had it in DVD while buying a Blu-ray upgrade — I've accidentally bought my fair share of duplicates from bargain bins! 🤦‍♂️). And crucially the process of adding new titles would be as simple as it gets: I could do it on my phone, without any extra export/upload steps. As a bonus, it'd be cool to have a barcode scanner to help with the workflow!

So with all that in mind, back in May 2022 I got to work, on my spare time. A few weeks later I ended up with a usable web application I've been occasionally improving. The app has been in use almost daily, as I've been watching a lot of movies and keep track of the watch dates*. I still want to improve the visuals a bit, but the app is feature-complete for my purposes already. The actual process of getting the collection up-to-date was of course a huge amount of work (importing the old collection data, combing over my shelves for movies that I had sold/upgraded, adding data the previous software didn't have, combing over the shelves again for new additions since 2010, trying to find their purchase information, dates, etc.), but it was so worth it. Should have done this years ago! 😎 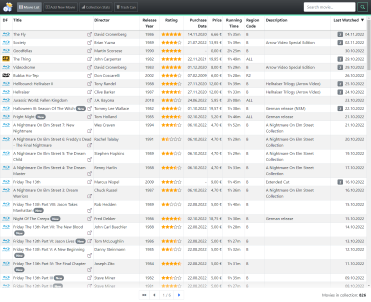 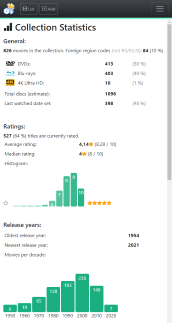 Now some technical details, for those interested. 🤓 In the spirit of the previous movie collection software written as an exercise in Python/Qt (and its even earlier predecessor in C#), this project would function as a dive in the current web development techniques: both frontend and backend. Full-stack, as they say! 😀 Initially I had the idea of building several prototypes in different tech stacks, but with limited time available ended up choosing not to do that and instead went on completing my one prototype. I chose Node.js (with TypeScript), Express + Pug running in Google App Engine as my backend and simply Bootstrap + custom JavaScript as the front. It's currently a regular, mostly server rendered web app with limited dynamic content loading on the client side, but perhaps at some point I'll switch to SPA-model (single page app). While that'd be nifty, this already works fine for my purposes. 🤔

Another important aspect was that I wanted to build the app to be as cost-effective as possible. Choosing App Engine and Firestore as the database was partly because of the low costs, and partly because of my experience with the former. Firestore can actually function serverless, but I wanted to try the backend development so that didn't matter. As a realtime (another feature I don't need) NoSQL database it's not the most obvious nor best choice for this use-case, but works and is basically free for my usage. And free is nice!

Initially I was wary of JavaScript because traditionally I've been a fan of statically typed languages (although Python is quite nice), but TypeScript was actually a pleasant surprise! Not bad at all. While still not a fan, I must admit vanilla-JS has improved a lot since I last took a look at it. Back in the days when JS was only used to open annoying pop-up windows and messages, and maybe change link images on hover events (CSS didn't exist yet).. 😅

*) The reason for keeping track of watch dates is I have a top twenty list of most watched movies in the collection statistics page. At this point the list isn't very exciting, but it will be interesting to see in, say, 10 years (probably in time for another blog post or two, considering my current posting frequency!) what movies I have ended up watching the most. And I do re-watch stuff regularly.