Graveyard of the old and abandoned, part I

And now for something completely different! I've been procrastinating making a post(s) like this for years, but somehow never really bothered to make it happen. So here goes: this will be a (short) series talking about a sampling of (very) old game projects of mine, that — for one reason or another — never got finished and released as proper games. Or at all, as is the case actually. Enjoy the stroll through history (not to worry: there are pictures and even a video!), and let me know if these kind of posts are interesting to read. I do have more of these abandoned games to show.

So first up: Badlands. This one, along with many more of my games (including our current project Oddhop!) was made in co-operation with my friend Teemu. My role, as always, was that of the coder and graphics guy. Teemu did the game design and sounds + music (although for this game I don't think we had music yet). If I recall correctly, we started this game after Ultimate Steroids was finished. So that was in 2001. Almost 15 years ago — we were snot-nosed kids! Damn!

Anyway, this is a game I really would have liked to finish.. We shut down the development in 2002 after over 9 months of work.

The lack of proper graphics was the biggest reason, I think. (See those weird heads in the video and screenshots? They're placeholders for proper enemy ships!) Funnily enough, now that I look at it, something similar could be whipped up in Unity quite quickly, but back then it was much slower progress due to having do all the tech myself. 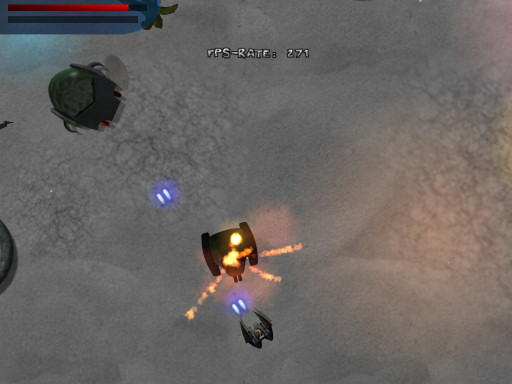 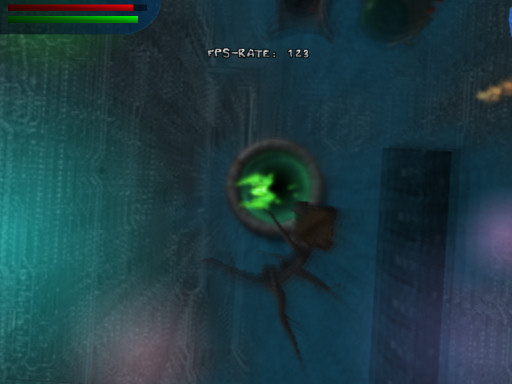 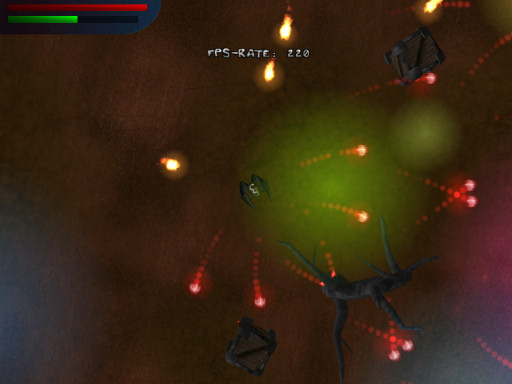 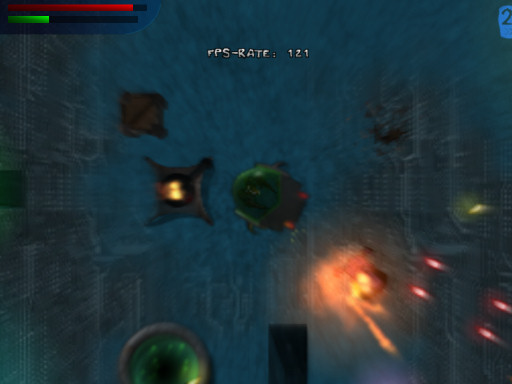 It was supposed to be a shooter game with a gritty sci-fi aesthetic, with proper levels but not much of a story. There were some interesting ideas that I think could have made it a nice little shooter. We had three different (albeit the graphics were the same since I didn't get to do them properly) ships with different characteristics and weaponry. You could at any time teleport out and switch into a different ship (unless you had wrecked it!). There were one common laser weapon for all the ships that had unlimited ammo, but it was weak. Each ship had separate, more powerful weapon that ran on a battery. When the battery was depleted, it would recharge but very slowly. To help with that problem, there were these "pools" on the ground: red pool would replenish your health, green pool would recharge your weapons battery and blue pool would act as a portal. Go through one blue pool and end up in another. 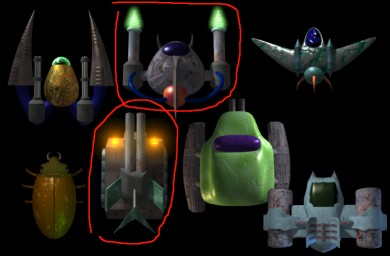 We had different enemies: most of them were machines, but there were organic giant bugs too (with very crude walking animation: three frames!

). All the vehicles were floating / hovering above the ground plane, when dead they would fall down. The enemy AI was quite sophisticated in the scope of my own games: they enemies had field-of-vision (FOV) cones in which they could see. If you shot them at their backs, they would quickly turn around and fire a few random shots in the direction from which they took the hit. Some enemies had stealth mode so they were harder to see, and some could try to dodge the player shots. Some smaller enemies even attempted to flee when their health was low. Looking back, it was interesting to do that kind of AI behaviour and for some reason I've never done anything similar later. There was also line-of-sight implemented, so the player didn't see enemies behind walls or other objects.

The game also had bonus crates, where you could get a random bonus that remained active for some time. You could have all the bonuses active at the same time, too. There were "bullet-time" type of slow motion thingy (it was popular in 2001 so I had to add it in!

): your ship and your bullets would remain at 100% speed but the enemies and their bullets were 50% of their normal speed! On top of that there were a vomit inducing effect that blurred the screen. It was quite neat back then, but unfortunately I made the decision to hard-code the effect for 256x256 texture.. Just take a look at the video to see how "nice" that looks today..

Other bonuses were shield bubble, double damage and stealth / cloaking device. Your ship was barely visible and the enemies couldn't see you (or at least the possibility of them seeing you was greatly reduced). 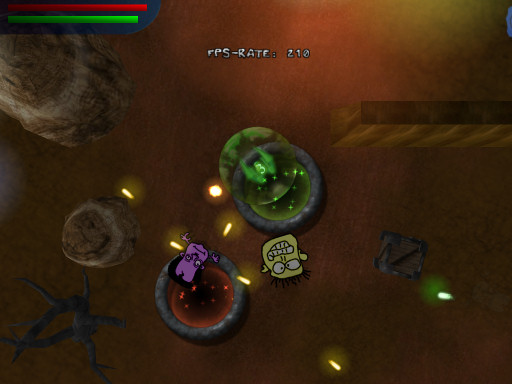 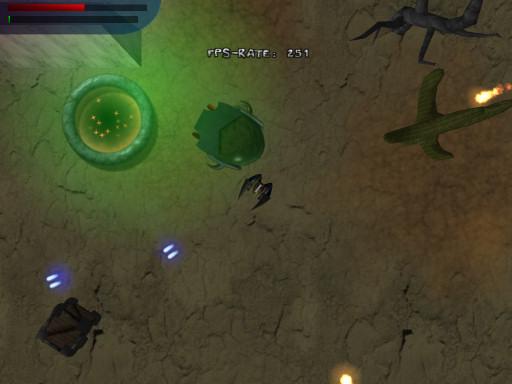 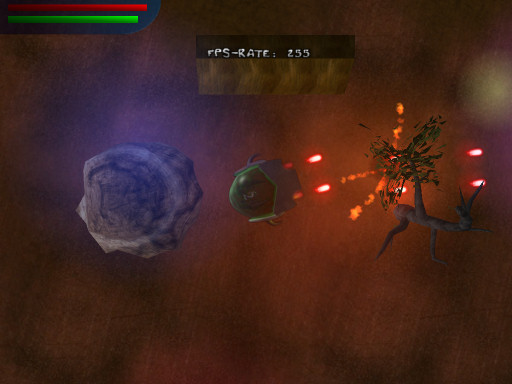 For the tech it was an OpenGL powered game written in C++. Allegro was used as the framework for inputs and whatnot, but the graphics engine was all mine. I think this was one of my first attempts at data-driven game development, as I was just browsing the game files the other day and found that all the weapons, enemies and objects were defined in textual configuration files. Each enemy was a physical object with mass, friction etc. It was my own physics so it was very rudimentary, just circle vs. circle collisions basically. The walls were always axis oriented to simplify collision checking. There were no Box2D back in those days, see?

I also had a beginnings of a level editor, where you could place the objects and stuff in place. But it definitely was not finished, and the game generates the maps randomly. And I mean literally randomly, there's no logic or any prefabricated pieces that are laid out, stuff is just spawned randomly. As seen on the video (which was fun to do, very nostalgic moments for me to be able to play this again after so many years!), things spawn inside walls and other objects. Fun times.

It was meant to have proper hand made levels, though. Random stuff was just a place to try the game mechanics.

In case you're wondering how the lighting looks a bit off, it's because I didn't know how to do proper lighting (additive lights on texture, multiply blend over normal scene) at the time. I used an ugly hack: it's just a transparent black quad drawn on top of everything, then the colored (random) lights are drawn over that. It almost worked on not-very-dark ambient lighting, but when you made the ambient darker, the black quad kept eating away at the details as you can imagine. Horrible way of approximating lighting, but that was the best I could think of then.

As mentioned, the bullet-time blur thingy was rendered into a 256x256 texture, which looks quite shit these days. I remember I didn't know how to use any proper render-to-texture techniques (FBOs, PBuffers — although I'm not sure if they were around in 2001), so I just rendered to 256x256 viewport, grabbed it into a texture (a big no-no in rendering, especially in mobiles but it's passable for PCs) and then rendered the normal frame on top of that with full viewport.

The effect itself was just several quads scaled and rotated, blended over the normal image. Trivial stuff but it was cool at the time.

One cool effect that can be seen on the video is the shattering effect when you break down crates, trees and even rocks. It looks alright even today, even though it makes quite apparent that the things are hollow. It was made simply by spawning a triangular particle on the original positions on the mesh, with the same texture and UVs. Then the triangular pieces would just simply fall down under gravity, and their vertices were clamped to the ground plane, so the piece would lay flat and then disappear. There were no rotations or anything, just this collapsing. Again, simple stuff but worked fine back then. Speaking of breakable props, I also had one building modeled, some oil-tanker looking round thingy with pipes going around. Unfortunately it was not in the build I had, so it didn't make the video.

Anyway, enough talking. Not sure if this was of any interest to you folks (let me know in the comments!), but for me it was very nostalgic experience to find out that the game still worked and I could play it and make this post. Almost makes me want to remake this properly using a modern game-engine!

Btw it seems I had hard-coded the aspect ratio to be 4:3 for some reason, so things look squished in the 16:9 video. Sorry about that, it was the times of those bulky 4:3 CRT monitors! Enjoy the video! I've annotated it a bit, too. There's no music in the video, I had some temp tracks but had to take them out.

That's it for part I in this game graveyard series! Let me know in the comments if you like this kind of posts, as I still have some other abandoned games to show. Originally I meant to include more than one in this post, but as Badlands was quite special project for me personally, I wanted to make the whole post about it. If you thought this was TLDR, don't worry, I don't have this much to say about the other games!